This year I've been using my free time to tour Japan extensively. A few months ago I broke my cruise virginity aboard the Costa Victoria ship on a great 10 day trip around Japan organised by 'Cruise Planet' in Tokyo. This exciting and relaxing trip certainly gave me the taste for more and so I recently packed my case again and headed for Nihon-Odori station closest to Yokohama Cruise Terminal for a second voyage with Diamond Cruises.

Diamond Princess is one of the flagships of Diamond Cruises with the company celebrating it's 50th anniversary this year. Diamond Cruises are a British firm so the ship bears the Union Jack flag and is registered in London. As I found out on my first voyage, cruise ships have a culturally diverse crew so it's always an international team effort - Japanese, Philippine, Brazilian, Mexican, Serbian, Ukrainian, Chinese, Indian staff to name just a few on this ship. Whereas the Costa Victoria cruise line boasts lively Italian musical flare and espresso machines aplenty, Diamond Cruises 'British' theme is instantly recognisable from it's English 'Pub' style bars, a Winston Churchill smoking room and many dapper restaurants with a Mayfair feel. To my delight, you can even find a full English breakfast complete with HP sauce hidden amongst the abundant morning buffet fair and washed down with a nice traditional cup of sugary milk tea! Of course, continental and Japanese style breakfasts were always on offer if that's your bag.

Diamond Princess spends a great proportion of it's itineraries in the waters of Asia and Australasia alternating between the two regions over winter and summer months. Their Japan itineraries vary in duration and port destinations but are quite strongly Japanised and focused towards local clientele; most signs and menus on the ship are changed to Japanese language.

The cruise I joined was a 7 day 4 port adventure from Yokohama through Tokushima via the Straights of Kannon (no port stop there) to Busan (South Korea) and then stopping on return in Nagoya before the original destination of Yokohama. This being summer season the cruise activities were based around traditional Japanese summer festivities and many of the passengers were Yukata clad families enjoying a hassle free break with loved ones. The kids almost never stopped splashing around in the many pools on board and the queue for the complimentary pool-side ice-cream was pretty constant. As expected in Japan they even have green-tea flavour on tap.

In keeping with the Japanese summer festival theme, the first stop on this voyage was Tokushima where we stopped for the lively and colourful Awa Odori Dance Festival as covered by a recent Japan Airlines article. All passengers received a ticket for this festival in their Cabin and evening buses ferried passengers to one of the Enbujyo dance areas about 40 minutes drive from our port.

The Diamond Princess has around 15 decks so as you can imagine there is plenty to explore and I was still getting a little lost sometimes even near the end of my trip. You have a choice of lounges, luxury shops, Leica camera store, family portrait studio studio, medical centre, library, internet cafe plus bar, pub, disco club and cafe areas.

Beyond the many tiers of observation decks there are many areas to sunbathe, swim, relax or exercise. The ship's gym and fitness studio was very comprehensive with a whole array of good quality exercise machines and free weights to burn those restaurant calories. If you want to jog you can use the running machines or head to deck five for a seaside quarter mile jaunt around the ship taking in the fresh air and listening to the hiss of this sleek ship cutting through the beautiful clean Japanese waters. Many passengers chose to take a quiet snooze or read books after breakfast on this deck as it's covered and has a relaxing ambience.

If it's a special occasion you can opt to be fully pampered in the beauty salon or Lotus spa with a wide choice of special skin or nail treatments and massage therapies. I noticed that many of the staff in these areas were actually Japanese hired specially for the Japan voyages to provide a better level of communication for the local Japanese clients. These staff also spoke good English.

Japanese are crazy for Onsens, lightly poaching themselves in energising mineralised hot water spas in remote rural locations for many hours ridding pains and woes of a busy lifestyle. For this very purpose, the Diamond Princess has a new Japanese Onsen facility called Izumi which looks very high tech: a circular pool with submerged circular chrome bar seating and blue LED lights for a kind of cyber zen atmosphere. As it’s on the rear of the ship you can sit there lightly steaming whilst watching the sun set. It looked like a very popular attraction which needed to be booked ahead of time (the Izumi spa required a modest extra charge).

Interestingly, although Diamond Princess has British roots the ship itself was actually made in Japan by Mitsubishi. It's enormous and very sleek and smooth in the water. The ride is very steady even in choppy waters and I slept very well with no rolling feeling like you might experience on some smaller ships. Mitsubishi proudly display their plaque on the deck five promenade.

Cabins on the Diamond Princess are grandly known as Staterooms - all are en-suite. Mine was a twin interior type on the starboard of 12th floor just a few strides from the rear outdoor deck where my LTE phone data signal thankfully worked quite well for much of the trip. The room was spacious and traditionally decorated with muted neutral tones, much as you would expect decor in a Japanese hotel. The rooms are well attended by your steward who you will quickly become familiar with as they pay close attention to your needs throughout the voyage. They also deliver a daily itinerary to your room detailing the schedule and events - English and Japanese daily itineraries were available. Obviously, when it comes to cabins the cost increases with the size and location on the ship and the Diamond Princess has something suitable for every budget. You can opt for exterior cabins with windows or balcony or go all-out for suite level luxury. One nice convenience on this ship was the coin-laundry complete with steam irons. A laundry service was also available from your cabin steward on request.

No matter what cabin you select the experience in the public areas of the ship is the same for all passengers and you have full choice of many good restaurants, buffets and bars and nightspots when aboard. The quality of ingredients was good with a large selection of international and Japanese foods included in the complimentary menu. A pizza and burger bar were also available for poolside snacking. You can choose to visit one of the speciality restaurants, Kai Sushi (Japanese) or Sabatinis (Italian) during your voyage for an additional charge but I found that there was plenty of variety included in the regular restaurants. If you prefer casual dining then Horizon court is a popular destination with it's buffet style breakfast, lunch, afternoon tea and dinner with extended hours. The choice is impressive and there's less need to dress-up for dinner here if you are simply hungry. The good news is that alcoholic drinks aboard are mostly cheaper than bar prices in Japan.

The scenery of this itinerary was nice but I did in fact miss one of the 6am highlights of sailing through the Kannon Straight complete with Japanese commentary from a local expert. There was plenty more to see though and some of immense white road and rail bridges we passed under where very impressive. Although there were only four stops on this itinerary there was plenty to photograph and Busan in South Korea is a great visit with a complete change of flavour.

On a cruise you need to be a little flexible as weather and safety dominate ship life. This particular cruise was no exception. After leaving Busan mid-way we were all ultra excited for our highlight of viewing the Kumano Grand Fireworks Festival from the deck of the ship. Unfortunately, the weather was getting choppy and storm clouds began to dominate the skyline during a very photographic sunset. A very unwelcome announcement soon apologised that Kumano city council had decided to cancel the display due to weather conditions - such is life!

Due to the cancellation, I had to console myself with a nice chilled bottle of beer from the Explorers Lounge bar while adoringly watching the Ukranian string Quartet 'Adagio Strings' who were very talented. Fortunately whilst on-board there are plenty of entertainment options provided by the cruise director. The Diamond Princess has a huge theatre auditorium and presents very professional musical productions and magic shows by a featured 2 metre tall magician who many chose as a great photo opportunity. In one of their headlining shows they even had a full sized pink Cadelac car as a prop!

On the top deck there's large LED screen for open-air movies. You can even get popcorn on board to replicate the full movie experience. On this itinerary the movies are mostly Japanese or dubbed into Japanese though so it's worth bringing a laptop/ipad with a few shows in your own language if you want an extended chill on deck with a glass of wine.

Overall I found the Diamond Princess experience very enjoyable. If I was going to compare it with the Japanese 'Costa Victoria' Cruise I took a few month before I would say that the Diamond Princess generally felt more Japanese orientated with staff probably more willing to speak Japanese than English. Diamond Princess was slightly more formal overall whereas the Costa Victoria was more casual and jolly with a party atmosphere plus lots of lively Italian and latin music. The Costa Victoria has a dedicated host assigned at boarding for any English speakers plus an onboard entertainment group called ‘Animation Team’ that were very good at getting people to join in the fun (but also just fun to watch). The Japanese passengers on both cruises seemed to be more like early-risers than nightbirds so if you're in a boozy party mood it may be worth bringing some likeminded friends. On Japanese cruises the early evening ballroom dancing scene is alive and well so get practicing as there could be some serious competition on-board!

The Diamond Princess is definitely a larger, classier and more well equipped boat with a little more budget for day to day catering. They have more dressy events for those wanting that classic glitzy cruise experience. Choose either of these ships and I’m sure you won’t be disappointed and Cruise Planet in Tokyo will be able to provide full details for you to decide on your vacation. With internal transport being expensive in Japan, cruising is a great way to experience multiple destinations in a relaxed way with the ultimate in convenience and a fixed price. You can get a quick taster of multiple regions and you can always head back to places you liked next trip. Another alternative is to board at one port and disembark in a different part of Japan. If you do this you could even book ‘open-jaw’ air tickets which are mostly the same price but can be cheaper if you leave from an airport with lower taxes/fees.

Useful Tips for booking and travelling

Once you have an idea of what adventure you might like H.I.S and Cruise Planet have some English speaking staff who will guide you further. Their main Shinjuku Branch is a good place to enquire. If you are actually in Tokyo it’s just a stone’s throw from the beautiful park of Shinjuku Gyoen.

Find out more about Osanbashi Pier. 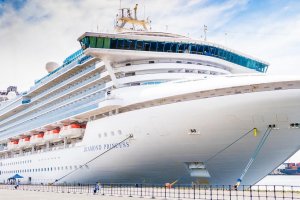 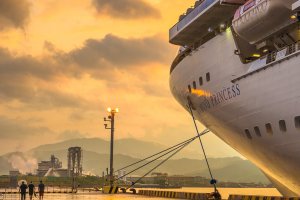 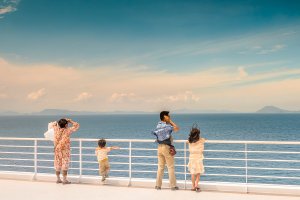 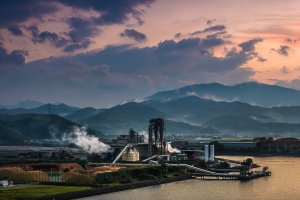 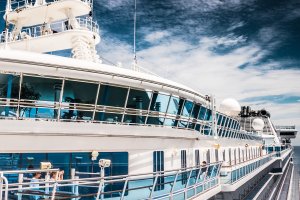 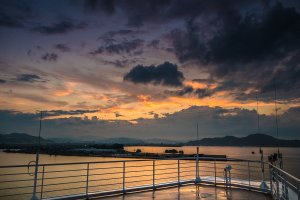