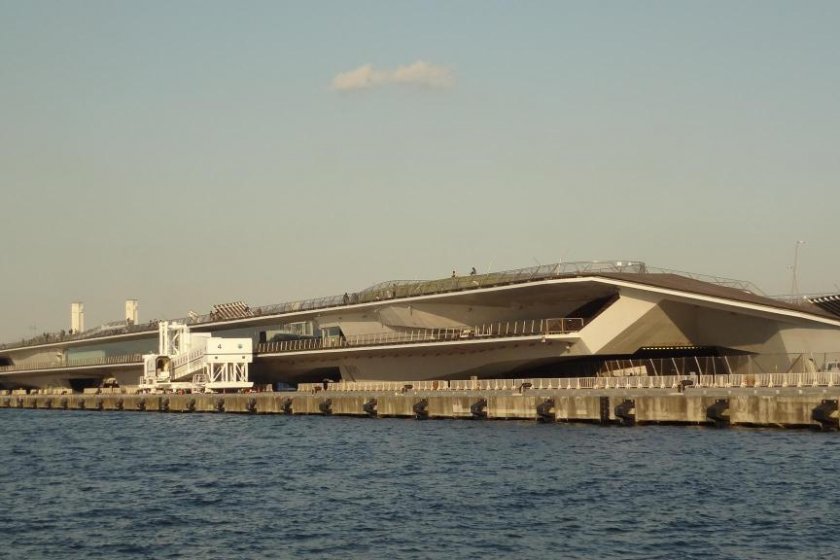 View of the Osanbashi Pier.

“I should come here more frequently!!!!”

Every time I drop in at Osanbashi (大さん橋) pier, I say this to myself unconsciously as I taste the joys of sitting on the grass, sipping strong coffee from my thermos and enjoying the magnificent view in every direction. I am in an ecstasy of delight. Osanbashi is a really splendid place.

Back in 1894, Yokohama opened a port and constructed an iron pier here.

Subsequently, the pier literally became the "gateway to Japan". Japan exported silk and green tea, and imported soybeans, wheat, raw cotton, coal, and so on.

In 1923 the pier collapsed in the Great Kanto Earthquake. At that exact moment the ship, the Empress of Australia, was leaving the port. Steel Navigator (a U.S. cargo boat) and Andre Lebon (a French mail boat) were also anchored to it. As people were waving and cheering to say good-bye to the Empress, the earthquake suddenly hit. Part of the pier broke up and the people who were standing on it fell into the sea.

After this tragedy, a new pier was constructed in 1925. As cultural exchanges between Japan and other countries grew over the next twenty years, huge numbers of passengers from abroad both arrived and departed from the new pier.

But a second tragedy, World War II, broke out. During the war, the US Air Force bombed the pier until the end of the war. From 1945 to 1952, the pier was requisitioned and called South Pier by American Occupation Forces. In 1964, Yokohama constructed an international passenger terminal and repaired the pier just in time for the Tokyo Olympics. The present pier, a gorgeous, unique wooden structure called Osanbashi, was designed by Farshid Moussavi and Alejandro Zaera-Polo. Their plan was chosen via a worldwide competition.

Osanbashi is said to resemble a whale, and so the send-off deck is nicknamed Kujira-no-senaka (the back of a whale) and the immigration lobby is called Kujira-no-onaka (the stomach of a whale). The deck is covered by green grass and wood. You might feel like you are taking a walk on a knoll. The deck’s ups and downs are so natural that we easily forget we are actually on a deck. The view from the deck is incredible! In addition to beautiful sea and sky, you can also see Mt. Fuji, the Minato-Mirai skyline including Landmark Tower, central Yokohama, the Marine Tower, the Hotel New Grand, the Hikawa-Maru ocean liner, the Yamate Bluff area, and finally…Yokohama Bay Bridge! In the daytime, you will find people having picnics, dating, reading books, and taking photos. When it begins to get dark, the most fantastic and breathtaking show starts: A gorgeous sunset (if you are lucky) with a silhouette of Mt. Fuji standing tall against the distant sky (if you are REALLY lucky); then dusk, the lights of Minato-Mirai twinkling on, and the Cosmo Clock 21 light show. Como Clock is the world’s biggest Ferris wheel. You should not move anywhere until the sky finally turns black. Please feel it and experience it for yourself!

Sometimes there are cruise ships anchored at the pier. Inside the pier is an immigration lobby. There is also a restaurant and café, several souvenir shops and an exhibition hall. You might or might not notice that this big space has no pillars, no beams and no steps. The wide-open space is really wide open! And slopes that are in, on, and around the pier are combined in many ways, making a complicated three-dimensional structure. Inside, you can also access Freespot Wifi. If your mobile machine is a Mac, it’s easy to set up.

Yokohama is quite famous for her gorgeous night view. There are many places I could introduce. But, Osanbashi is definitely the best! I hope you have a chance to come here and spend some precious time surrounded by this spectacle of Yokohama. Few can resist her charm and beauty if they come at dusk, especially in late October to mid-November when it's not too hot and not too cold. Mt. Fuji can best be viewed from here in the winter, but dress warmly-it's freezing!

Find out more about Osanbashi Pier.

Japan is a small island nation, but we have a huge number of surprising things to discover here. Many of these delights can be found when you step off the main street onto small side paths. I really enjoy studying about and researching various aspects of traditional Japanese culture, and then sharing this information with visitors to Japan. I hope you will enjoy it, too! ARTICLE INDEX & PHOTOS:  An index of most of my Japan Travel articles can be found at the entry page of my blog, and my photos are shown here.  日本はとても小さな国ですが、大通りから一本小道に入ればたくさんの発見があります。日本人が積み重ねてきた歴史を学びながら、古い建物や庭を訪ね、物語の舞台となった景色を眺めて、皆様といっしょに日本文化の奥深さを探求していきたいと思います。 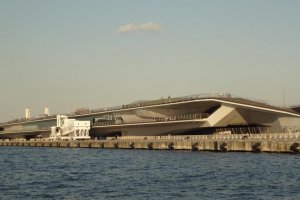 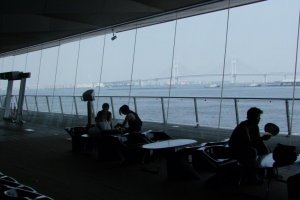 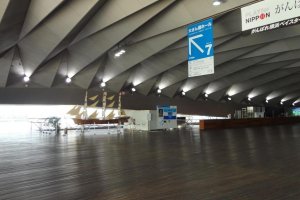 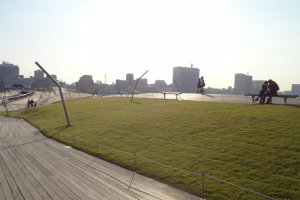 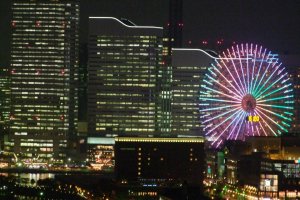 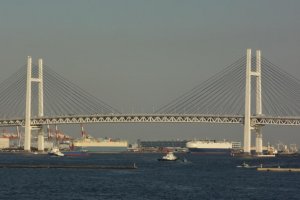