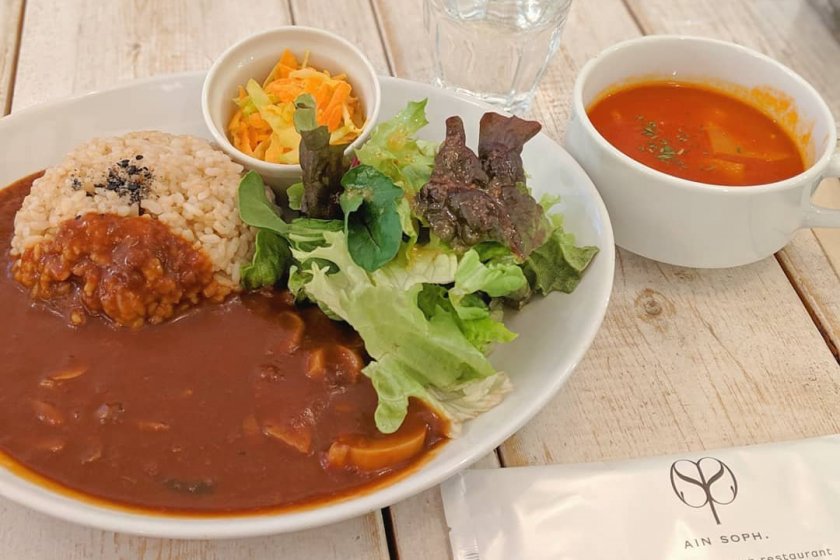 The Hayashi Rice includes mushrooms in lieu of beef - you won't miss having meat!

In early summer I had a friend come and visit Japan, and that friend of mine is vegan. That means we have to hunt down vegan eateries to dine at, but thankfully there are quite a number of great options to enjoy in Tokyo - and more and more are popping up all the time. We had both previously eaten at Ain Soph Ripple in Shinjuku, so we decided to try their sister restaurant Ain Soph Soar in Ikebukuro.

The first thing you'll notice when you walk in is the decor. It has a bit of a farmhouse/rustic chic vibe to it, with whitewashed tables, charmingly mismatched chairs, and potted greenery scattered around. We felt comfortable right away! The true test though of any good restaurant is ultimately the food, and we were impressed there too.

The menu at Ain Soph Soar is quite different from the decidedly "comfort-food" approach of Ain Soph Ripple. At Soar, you'll find weekday lunch offerings that include the likes of a brightly colored vegetable paella, a vegan take on the Okinawan staple dish of taco rice that uses soy meat, and a hayashi rice that incorporates mushrooms for texture instead of beef. You're able to order a la carte off the menu or opt for some of their lunch sets which include multiple courses if you're feeling particularly hungry.

Those with a sweet tooth don't miss out here either. Their pancakes are incredible, and have the additional benefit of being gluten free as well as vegan. Many of their cake and muffin selections seem to rotate on a seasonal basis, but the pancakes are a permanent item.

Ain Soph Soar is located an easy 10 minutes on foot from Ikebukuro Station. The restaurant is also in close proximity to other local attractions like the Sunshine Aquarium.

I'm an Australian who has lived abroad for almost a decade, including 7 years in Japan - specifically Tokyo and Niigata. I've  visited 44 of 47 prefectures - with only Kagoshima, Miyazaki and Kumamoto left to check out. I'm particularly fond of exploring off the beaten path destinations, gardens, and tea houses, and have a real interest in Japan's growing vegan scene. 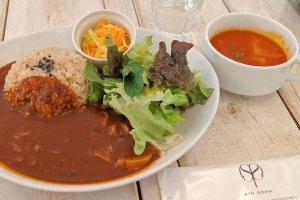 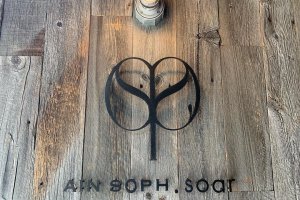 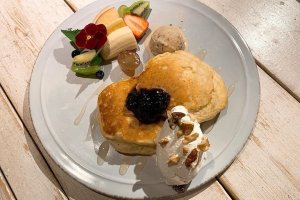