One of Tokyo's many rivers

With so much in the way of neon lights, megalopolis-leaning entertainment and never-ending business, it turns out to be a surprising fact for many that Tokyo is actually a city of rivers.

More than one hundred rivers flow within the capital, but with Tokyo's decades-long pace of frantic development, many of them are hidden underground. The city's four major rivers are clearly visible though. The Arakawa, Sumidagawa, Edogawa and Tamagawa rivers are major avenues of water that have played a direct role in the growth of Tokyo as a city.

Besides the big four, other rivers like the Shinnaka still captivate. Running between the Edogawa and Arakawa rivers, the Shinnaka River splits off from its parent Naka River and flows for about eight kilometres south before merging with the Kyuedo River and emptying out into Tokyo Bay further on.

Aside from a number of boat docks and wharves where the space naturally shrinks to accommodate the boats, both banks of the entire length of the river are made up of green space. For a city that is often thought to be crying out for open spaces, the existence of rivers like the Shinnaka must seem like a tissue that wipes away the tears. Seen through perspective, Tokyo comes attached with plenty of space

Daily joggers and dog-walkers have plenty of distance to take care of their health and that of their canine friends. Twenty-six bridges connecting both sides of the river give ample opportunities to increase that distance. Visitors, taking their time, have the chance to take in the general vista of one part of a suburban Tokyo that rarely receives a mention in the more brand-name focused travel itineraries.

The closest train station to the river is Ichinoe Station on the Toei Shinjuku Line and lies at the southern end of the river. The river is no more than a minute's stroll from the station. 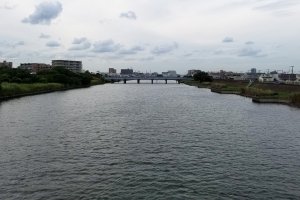 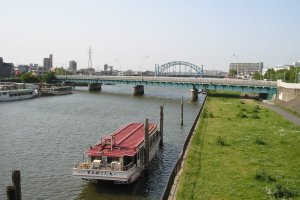