The Sweet Soul of Wakayama

Over 400 years ago, famed samurai Yukimura Sanada chose the losing side in one of Japan’s most notable conflicts, the Battle of Sekigahara, and had to flee. Exiled to the monastic settlement of Koyasan, the Nagano-born warrior (often referred to as one of the greatest samurai of the Sengoku period) found his way to Kudoyama, a small village in central Wakayama Prefecture not far from the holy mountain. For Sanada, his time in Wakayama was imposed on him. Mine, on the other hand, is entirely by choice. Who could resist a chance to visit a place tinged with mystery, surrounded by nature and relatively untouched by the over-tourism of other regions?

While most visitors coming from Kyoto or Osaka head straight to the hilltop temples of Koyasan, my travel companions and I disembark at rural Kudoyama Station, a stop on the Nankai Line between Hashimoto and Gokurakubashi (at the base of Koyasan).

The Sanada clan crest, six coins divided into two rows, is found everywhere in Kudoyama, from the train station to the town's welcoming rest house to hanging decorations over local doorways. It also decorates the menus of Yukimura-an, a chic soba restaurant housed in a building tied to the Sanada family. The soba set meals, with noodles served either hot or cold, are incredibly filling, but save space for the housemade sesame tofu. On your way out, be sure to poke around Sanada-an around the corner, an old temple that once served as a home for the fleeing samurai.

It's nice to have a sweet treat after a full meal and you can make your own at Kanazawa Juouken, a traditional wagashi (Japanese sweets) shop a short car ride from Kudoyama's town center. The helpful staff at Kudoyama Taxi shuttle us over to the wagashi store and arrange for us to be picked up after our hands-on workshop.

At Kanazawa Juoken, the fourth generation shop owner uses a digital translator and a shared love of sugar to bond with students. In the shop’s spacious back room, we learn to make a variety of traditional Japanese sweets, from seasonal namagashi (unbaked sweets) to popular pancake-like dorayaki. Most we eat on the spot with a cup of green tea; a few we save for a special snack on the go.

Sweets aren’t the only hands-on food experience in town and we return to the center of Kudoyama to Kuwaraku, for an opportunity at making the local specialty of kakinoha-zushi (persimmon leaf-wrapped sushi). Donning protective gear for food safety, we jumped right into the sushi tutorial. A helpful bilingual booklet—complete with photos—is there for our reference in case we get stuck, but the staff during our visit number as many as the participants and a helping hand is only a glance away. We press the rice in the vinegared molds and cut each block into six pieces. The trickier part comes when the rice is wrapped (along with a vinegared topping like mackerel, salmon or mushroom) in a persimmon leaf. Folding the leaf, which is known for its antibacterial properties, over the rice is akin to wrapping a present. Inevitably, as with my gifts, they all end up with slight variations. Since kakinoha sushi doesn’t need to be consumed immediately, we take it with us as a trail snack for the next day’s planned hike.

Luckily, our accommodation isn’t far – a beautiful old Japanese home owned by Kuwaraku has been turned into a rental property. We feast on a simple yet filling dinner of tempura, rice and miso soup before burrowing into our futons for a peaceful night’s sleep. (If by chance, the guesthouse is booked during your visit, an equally comfortable stay sits just a short walk away at Ryokan Tamagawa-tei. Simple bedrooms with comfy mattresses, delicious homemade dinners and breakfasts and a visit to the local onsen complex Yunosato are all included in the room rate.)

Morning dawns bright, early and appropriately cold for February, so I layer up and grab my gear for a hike up one of Koyasan’s old pilgrimage trails. Our route, Koyasan Choishi-michi Pilgrimage Route, starts at Jison-in Temple, and that’s where we meet our energetic guide, Noriko Matsuyama. She explains that until the late 19th century, Koyasan was strictly for men; women were forbidden to set foot on the mountain. Even Koyasan founder Kobo Daishi (also known as Kukai) wouldn’t permit his own mother on the peak. Instead, he built her a small hall (Miroku-do) at this temple complex, open to all women since its founding. With prayer plaques emblazoned with breasts and special charms for safe childbirth, it’s clear that the temple has garnered a special place among female devotees.

Matsuyama leads us into bamboo forests and along terraced fields, with views over Kudoyama and the hills that block us from Osaka's bright lights. We snack on our kakinoha-zushi and free fruit offered by farmer's with abundant harvests, left for passing pilgrims to take at their leisure. The food fortifies us for further inclines and we cross into whisperingly quiet woods with towering cedars and local pines. Trail companions are few but friendly; we don't meet any of the animal variety but the hoofprints of deer and wild boar are abundant in the muddier ruts.

After four hours, we reached our destination – not the peak of Koyasan but the Niutsuhime-jinja Shrine. While I’ve seen the grounds of many shrines, the priest here welcomes us inside the shrine office for tea, snacks and a talk on Shinto, before ushering us into the hallowed main hall. I sit quietly with my travel companions while another priest intones blessings on us in a ceremony known as Gokito and pantomimes how we can participate. I leave with a deeper sense of connection to the shrine, and the hope that their well wishes will carry me through the year.

A few steps away from the shrine's main gate, the Café Kyakuden offers filling lunch sets made with local ingredients. In spring 2020, the cafe plans to begin offering kimono dressing, and the staff is eager to show us their sumptuous robes.

To save our legs, we're delivered to the town of Koya by private car and dropped off outside Rengejo-in, one of 52 shukubo (temple lodgings) in Koya and our accommodation for the night. We've timed it perfectly - within minutes of dropping our suitcases, we're ushered in to watch the temple's Goma Fire Ritual, a ritual where sticks bearing the prayers and wishes are burned in a fire. The monk fingers a string of well-worn prayer beads and chants over each smoldering stick. It's a mesmerizing ceremony. (Thanks to permission of the temple and the Koyasan and Wakayama tourism boards, we were able to photograph and film the ceremony. However, casual visitors will find that photos and videos are not permitted at most religious events in Koyasan. When in doubt, it's best to ask.)

I have the chance for even greater introspection when we join the monks in an evening meditation. Forty minutes initially sounds like an eternity and my knees protest about 10 minutes in. But once I adjust my breathing and my position, the time passes quickly. I feel rested, but hungry.

Dinner is served in a group dining area, and I count at least a dozen dishes on the multiple trays that arrive. Rengejo-in serves shojin-ryori, a vegetarian-based cuisine that adheres to strict Buddhist principles. Despite its lack of strong seasonings, each dish is prepared to highlight the ingredients' best flavors. Throughout the meal, we're watched over by a set of armor that belonged to the Sanada clan, cementing once again the family's connection to the area.

We meditate again in the early morning, our puffs of breath mingling with the incense in the air. Breakfast is obviously shojin-ryori, but I marvel at how many different tastes the chefs seem to be able to tease out of simple vegetables.

Goodbye to All That

Matsuyama meets us for a stroll through town, with our goal being the Okuno-in cemetery. Japan’s largest cemetery houses thousands of graves, and Matsuyama seems to know stories for a majority of them. The most important one, however, sits behind the Lantern Hall (Toro-do) – it’s the final resting place of Kobo Daishi, founder of Shingon Esoteric Buddhism and Koyasan itself.

While we see some tombs with unique features or even rocks or coins left to mark a visitor's passage, Matsuyama cautions us against leaving any physical trace. In recent years, manmade objects such as coins have been pressed into tree bark, inflicting wounds on the ancient forest. While the intent is likely not malicious, the best course of action for us is to add nothing to Oku-no-in's landscape.

The most important tomb of all sits behind the cemetery’s Lantern Hall – it’s the final resting place of Kobo Daishi, founder of Shingon Buddhism and Mount Koya itself.

Kobo Daishi allegedly died in 835 but true believers claim that the famed monk sits in eternal mediation inside his mausoleum behind the Lantern Hall. As a result, the monks of Koyasan bring food to their founder every morning at 6:00 am and 10:30 am. Thanks to Matsuyama, our timing is perfect and we watch the disciples in their mustard-yellow robes bear a pallet of food up the path to his place.

It isn't long before we all crave a bit of sustenance ourselves and we refuel at Maruman, a homey shokudo (casual "cafeteria") on Koyasan's main road through town. With warming dishes like pork cutlet curry and croquette lunch, it's a good place for a filling meal.

It’s impossible to see all of Koyasan’s 117 temples, so Matsuyama makes sure we hit the highlights. Kongobu-ji Head Temple, the head temple of the Shingon Esoteric Buddhist sect, boasts beautifully painted screens and a Japanese rock garden—the largest in Japan—featuring entwined dragons in a sea of clouds (white pebbles). Danjo Garan Sacred Temple Complex, on the other hand, commands attention with its brilliantly-colored vermillion pagoda. The structure’s interior is equally bold, and a statue of the Cosmic Buddha (the Dainichi Nyorai), the central Buddha in Shingon Esoteric Buddhism, sits surrounded by glittering guardians and paintings.

All too soon, it’s time for our adventure to draw to a close. We make our way to the funicular, the steepest cable car in Japan that’s been transporting visitors to and from Koyasan for decades. It’s fun to stand in the very front of the car, just behind the driver, to watch the careful orchestration of the ascending and descending cable cars as they pass each other on their respective journeys.

From Gokurakubashi Station, at the foot of the hill, it’s a quick and obvious transfer to the Nankai Line, which chugs its way slowly through a cut in the mountains and eventually arrives at the station of Hashimoto. If you’re heading to Wakayama City, you can head upstairs to the JR Line. For those heading to Osaka and Kansai Airport, it’s an easy jump across the platform to an express train that will take visitors onward with later transfers as needed.

And yet, despite its accessibility, Koyasan still stands apart, maintaining an atmosphere of meditative peace that has been cultivated throughout the centuries of its existence. It’s an entrancing place and while I know I have to return to the airport, a good part of my spirit longs to stay.

Wakayama Prefecture, located on Kii Peninsula in the Kansai area of the main Honshu island, Japan, is home to Wakayama Castle; the..

Japan resident for 9 years, with time spent in Okinawa, Kumamoto and Tokyo. 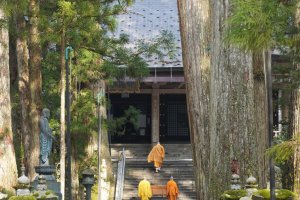 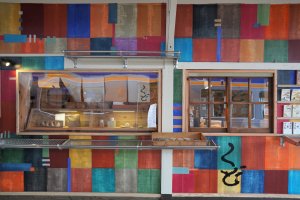 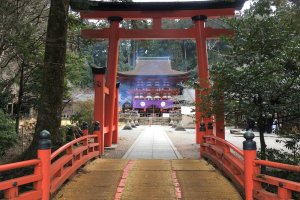 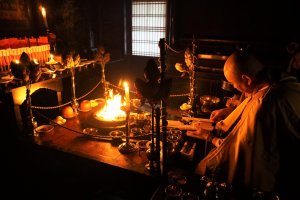 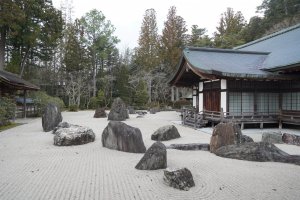 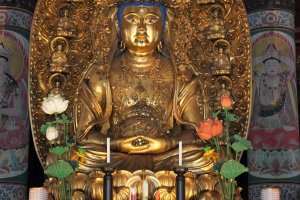